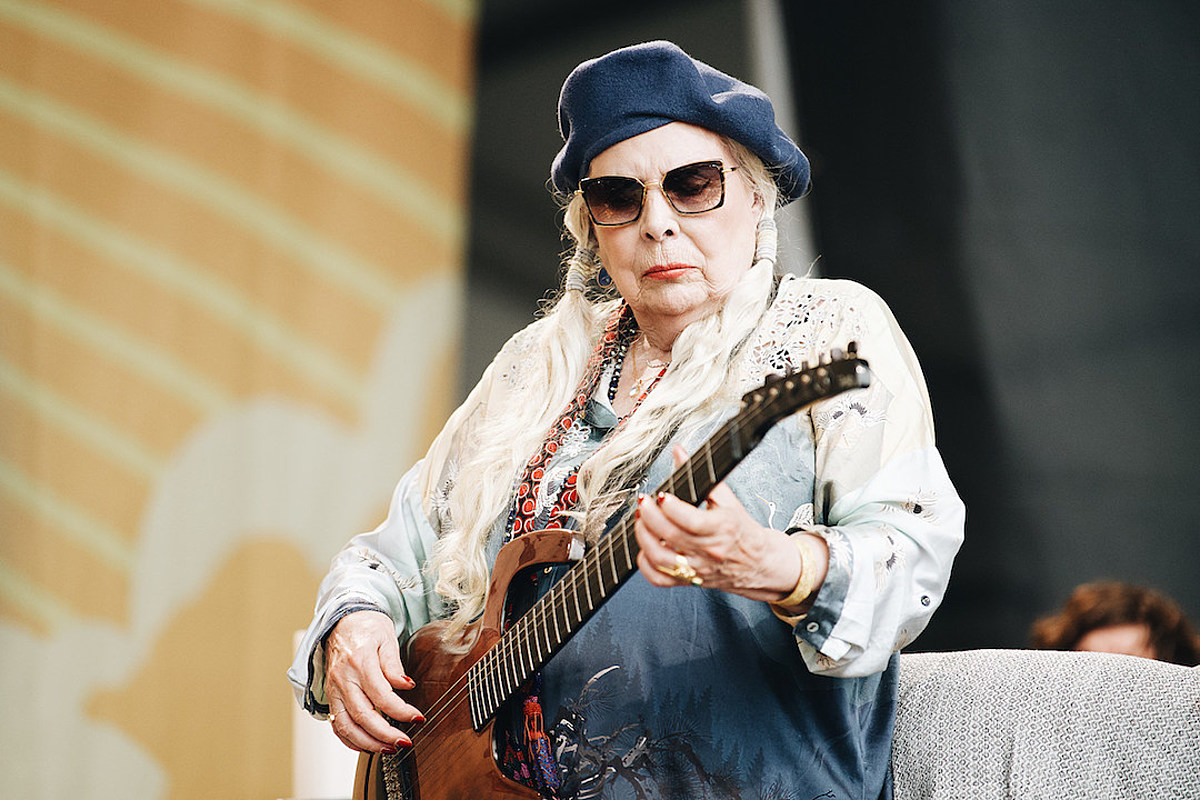 It is nearly impossible to feel cynical at the Newport Folk Festival. Despite the state of the world during any given year (increasingly bad), the annual festival in Newport, R.I., offers a reliable supply of life-affirming moments and incredible performances. This year saw the festival return to full-scale after last year’s COVID-restricted “Folk On” event, and the sense of joy and gratitude among both the performers and audience members was palpable. From Maren Morris’ solo debut to Joni Mitchell’s surprise appearance, here are the best things we saw at the 2022 Newport Folk Festival.

FAYE WEBSTER MAKES US CRY IN A GOOD WAY

The famously melancholy Faye Webster was all smiles during her Friday set on the main stage, imbuing even her saddest songs with self-awareness and humor. She and her band went especially hard on their cover of “7 PM,” an instrumental number by the great K.K. Slider of Animal Crossing acclaim.

John Moreland offered little banter during his Friday set on the Harbor stage, instead choosing to let the songs speak for themselves. Accompanied only by his own electric guitar, Moreland played the solemn country troubadour rather than the sly experimentalist of recent albums. It was a quiet, moving set, memorably featuring an unexpected (and very lovely) cover of the Sheryl Crow classic “Strong Enough.”

COURTNEY BARNETT PICKS UP THE TEMPO

Courtney Barnett brought her A-game to the main stage on Friday afternoon, zipping through her catalog of brilliantly droll songs at what often felt like 1.5x speed. “I had a feeling this would be a good singing audience,” she said with a smile at the end of “Avant Gardener,” one of multiple numbers that culminated in a group sing-a-long.

THE TALLEST MAN ON EARTH HELPS US OVER

On Friday night, after the festival closed its gates for the night, Kristian Matsson of Tallest Man on Earth hosted a benefit show at the historic Jane Pickens Theater in Newport. Titled “How We Got Over,” the show featured Matsson, Phil Cook and a host of surprise guests sharing music and stories in a celebration of getting through the last two years of the pandemic. The entire night was joyous and affirming, but the most memorable moment was undoubtedly when Natalie Merchant joined Leslie Gardner and Simone Appleby of The Union for a stirring cover of Stevie Wonder’s “Heaven Help Us All.” (“Heaven help the boy who won’t reach twenty-one / Heaven help the man who gave that boy a gun / Heaven help the people with their backs against the wall / Lord, Heaven help us all.”)

“I’m bringing the South with me,” Adia Victoria declared early into her Saturday set on the main stage. “Hope y’all don’t mind.” Shrouded in black and sporting a shiny pair of red cowgirl boots (“made for walking all over white supremacists,” as she says), the A Southern Gothic singer channeled the supernatural during a gripping set that paid tribute to different blues greats and featured memorable cameos from Jake Blount, Lizzie No and Leon Timbo of the Black Opry, Kam Franklin and Victoria’s mother.

By this point, Lucy Dacus is a Newport mainstay. Her main stage debut marked her fourth performance at the festival in six years, and she came off like an old pro. Dacus breezed through Home Video highlights like “Hot & Heavy” and “VBS” and nailed an autotune-free cover of Cher’s “Believe” before bringing down the proverbial house by ending with “Night Shift.” It offered proof that there truly is nothing better than standing in direct sunlight and scream-singing about your ex on a Saturday afternoon.

THE BLACK OPRY REVUE COMES FOR EVERYTHING

The Black Opry’s Newport debut was, predictably, a triumph. The roster of performers — made up of Autumn Nicholas, Julia Cannon, Chris Pierce, The Kentucky Gentlemen, Lizzie No, Leon Timbo, Buffalo Nichols and Joy Oladokun — was so uniformly excellent that each individual song felt like a high point. Seeing members of the Black Opry appear during various sets throughout the weekend affirmed what everyone immediately knew: this would not be the collective’s last time performing on the Newport stage.

SIERRA FERRELL STUNS IN MORE WAYS THAN ONE

When Sierra Ferrell emerged for her Sunday set on the main stage in full Pirates of the Caribbean drag — complete with a corseted gown and feathered tricorne hat — it was clear that the crowd was in for something wild. Melding elements of country, bluegrass, swing and tango (to name just a few) Ferrell delivered a thrillingly eclectic set befitting her reputation as an anachronistic mastermind.

VALERIE JUNE IS DEFIANT ON THE MAIN STAGE

One of the most moving moments of Valerie June‘s Sunday set came early, when frustrating sound issues forced her to interrupt her set. As her band and the festival crew moved busily around her, June spoke about having her heart broken by the recent Roe v. Wade reversal before singing a few bars of Joan Baez’s “Wagoner’s Land.” (“Oh, hard is the fortune of all womankind / She’s always controlled, she’s always confined.”) Later, as June moved through songs like “Workin’ Woman Blues” and “Smile,” pausing frequently to speak on injustice in all its forms, she sounded especially defiant.

Maren Morris returned to Newport for her first solo performance on the Quad stage after the Highwomen made their debut on the same stage in 2019. The Humble Quest cuts that made up the bulk of Morris’ set were uniformly lovely, but the crowd was undeniably most excited to hear older hits like “80s Mercedes,” “Rich” and (especially) “My Church.”

JOY OLADOKUN SPEAKS TO THE TIMES

“I wouldn’t do this job if the world wasn’t so f–ed up,” Joy Oladokun told the Quad stage crowd on Sunday, breaking down as she described the difficulty of soldiering on through increasingly terrifying times. The moment came as she introduced her song “i see america,” which morphed thrillingly into a cover of Nirvana’s “Smells Like Teen Spirit.” It was one of those moment when subtext becomes text, when artist and audience come together in recognition of the work that desperately needs to be done.

Before the surprise “Joni Jam” on Sunday night overshadowed pretty much everything that preceded it, Brandi Carlile delivered a performance worthy of her icon status. Carlile and the Hanseroth twins blazed through favorites from last year’s In These Silent Days (“Broken Horses,” the Lucius-assisted “You and Me on the Rock”) and a triumphant rendition of “The Joke” before slowing things down with “Stay Gentle” and “Somewhere Over the Rainbow.” With remarkable efficiency, Carlile demonstrated why she remains the undisputed queen of Newport.

By now, so many videos of Joni Mitchell’s surprise Sunday appearance — her first at the festival in over 50 years — have circulated on social media that it’s possible to experience nearly the entire thing, probably from multiple angles. But there are some things that the video can’t quite convey. One is the heavy fog that descended on the Fort late Sunday afternoon, enshrouding the venue so that the rest of the world seemed to actually disappear. Another is the nervous energy that jolted through the crowd before Mitchell even appeared. Carlile sounded uncharacteristically shaky during her introductory speech, and there seemed to be a collective understanding that this would be an extremely big deal. Carlile described Mitchell’s appearance as a “trust fall,” and each of the performers who surrounded her (including Celisse Henderson, Taylor Goldsmith, Jess Wolfe and Holly Laessig of Lucius and Marcus Mumford) appeared afflicted with the same mixture of anxiousness and awe.

The person who ultimately set everyone at ease was Mitchell herself. The legend laughed graciously and frequently, clearly delighted by the audience’s rapturous response whenever she sang on her own. The tension seemed to lessen with each song, so that when Mitchell fully took the lead late in the set — first on a cover of Gershwin’s “Summertime” and then on a tear-inducing rendition of “Both Sides Now” — the floodgates opened and the tears started to flow. Here everyone suddenly was, witnessing something that very few people would ever experience, and nobody wanted it to end.

John Prine could write a song like no one else. Throughout his five-decade career, the folk icon proved himself to be one of a kind.

Prine’s lyrical stories were both fantastical and simple; he wrote with a Midwest-bred honesty and humor that kept listeners on their toes. His catalog, spread over 18 albums, contains vivid stories (“Lake Marie”), insightful looks at the human condition (“Hello in There”) and sweet love songs (“Aimless Love”).

Impressively, Prine was only in his mid-20s when he wrote song of his most beloved songs, from “Sam Stone” to “Angel From Montgomery.” He earned critical and industry acclaim, even if his work was not particularly commercially successful, and his songs were covered — and made into hits — by everyone from George Strait to Miranda Lambert, among many others.

These 13 Prine lyrics — largely pulled from his songs’ choruses — are some of his very best: