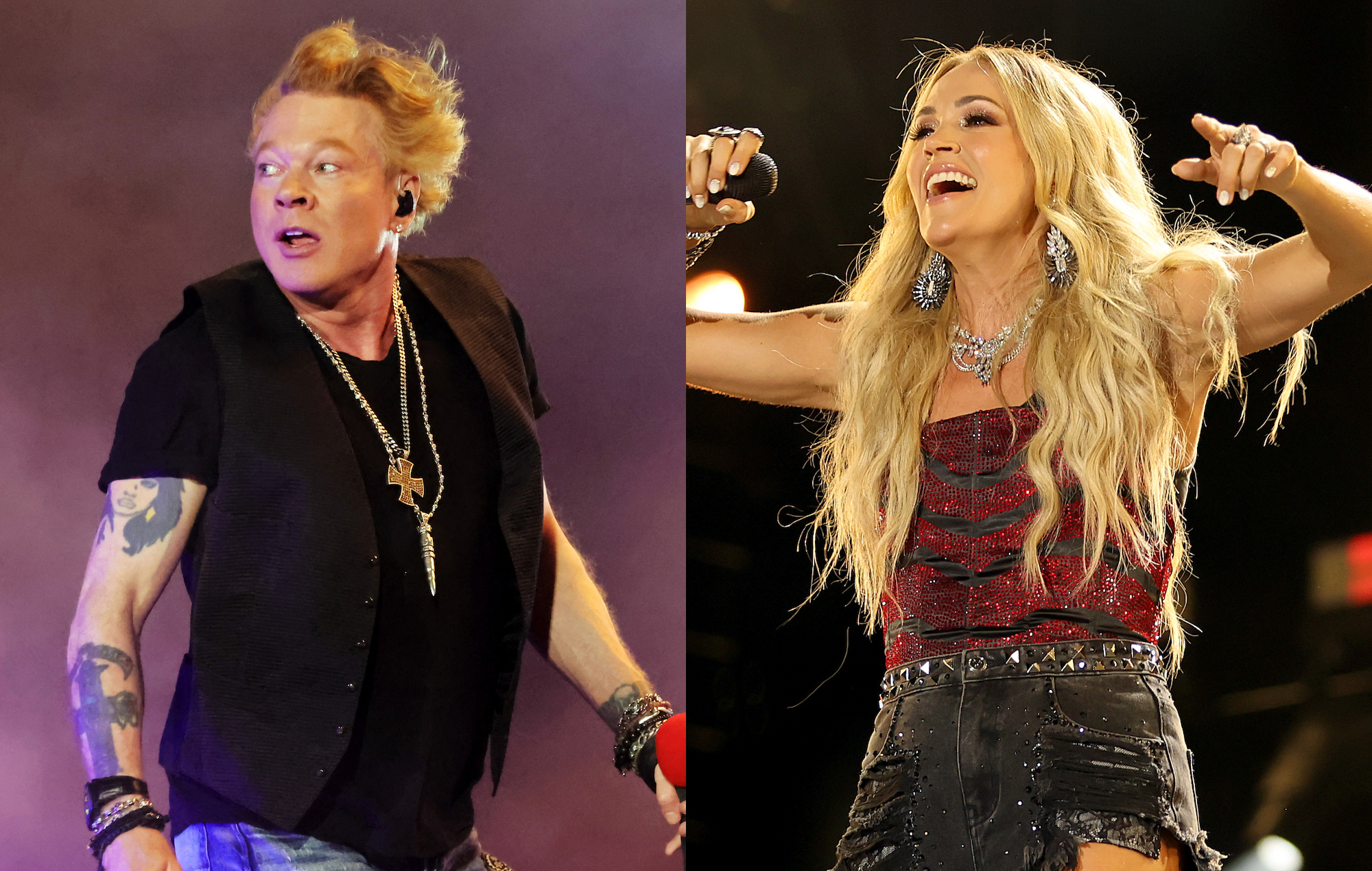 The 2005 American Idol winner joined Axl Rose and co. twice during their 22-song set – first towards the end of the main performance to sing on ‘Sweet Child O’ Mine’, and then during the encore to close the night out on ‘Paradise City’. It echoed Rose’s guest appearance during Underwood’s set at this year’s Stagecoach Festival in May, where the frontman joined her and her band to perform those same two songs.

Have a look at fan-shot footage of Underwood singing with Guns N’ Roses below:

Elsewhere in the set, Guns N’ Roses played both of the original songs on this year’s ‘Hard Skool’ EP – ‘Absurd’ and the title track – and a quadrant of the covers that have long remained staples in their setlists: ‘Live And Let Die’ by Wings, ‘I Wanna Be Your Dog’ by The Stooges (for which bassist Duff McKagan took over on lead vocals), ‘Knockin’ On Heaven’s Door’ by Bob Dylan (mashed up with the intro to Alice Cooper’s ‘Only Women Bleed’), and ‘Slither’ by Slash and McKagan’s own Velvet Revolver.

The show was not without its technical difficulties. For starters, concertgoers were left queuing for hours before they were even let inside the stadium. The first support act, Gary Clark Jr, was scheduled to perform at 4.30pm, however some punters were still waiting to be let inside at 6:30pm.

Guns N Roses were scheduled to take the stage just 15 minutes later, but according to one fan on Twitter, they didn’t come out until around 7:45pm, and their set was shortened as a result. Seven songs into their set – during their performance of ‘Estranged’ – the show was momentarily paused due to sound problems.

The band will perform at Tottenham Hotspur Stadium again tonight (July 2). A limited reserve of tickets is still available to purchase – find them here.

Guns N’ Roses are scheduled to tour across Europe this summer. In Autumn, they will head over to South America and Mexico, before visiting Australia and New Zealand at the end of the year. You can find tickets here.

London Based Singer/Songwriter Tony Moore Releases His New Single “I Cry For You” On October 14th As A Tribute To His Late Mother
Dwayne Johnson Thanks Fans For 20 Years In Hollywood, Reflects On His Humble Beginnings
Wolfgang Van Halen describes “closure” after tribute to father Eddie
NAV & Don Toliver Perform “One Time” On Jimmy Kimmel Live!
Serj Tankian Releases Artsy Black-and-White Visualizer for “The Race”