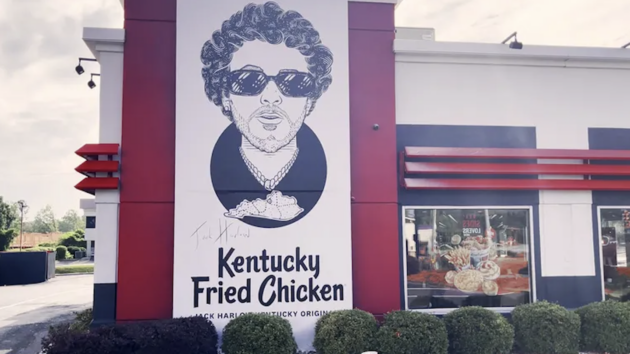 The launch event was held at a KFC restaurant in Smyrna, Georgia, where the “First Class” rapper greeted fans, held interviews, and served his limited-time offer from the drive-thru.

The “Jack Harlow Meal”, selected by the Louisville-native himself, is a combo served in a limited-edition Jack Harlow and KFC co-branded packaging, which includes a Spicy Chicken Sandwich, mac & cheese, fries, a side of ranch, and lemonade. The meal will be served nationwide beginning Monday, June 6.

“From releasing ‘Come Home the Kids Miss You’ and now launching my own meal at KFC, I’m having a super blessed summer,” said Harlow in a press release. “When KFC asked me to create my own meal, I knew it couldn’t be just any meal. My meal brings together my childhood favorites from growing up in Louisville, the KFC Mac & Cheese, with my new go-to Spicy Chicken Sandwich (with plenty of ranch), Secret Recipe Fries, and lemonade – it doesn’t get much better.”