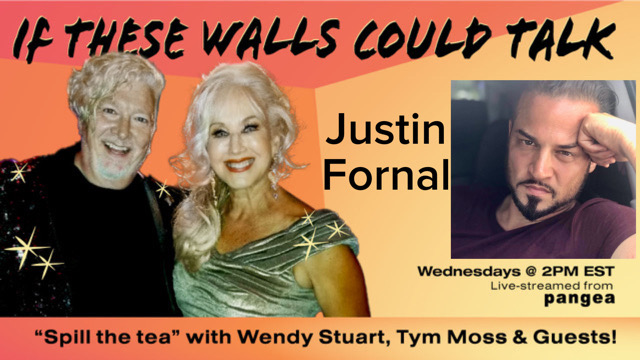 Justin Fornal will be a featured guest on “If These Walls Could Talk” with hosts Wendy Stuart and Tym Moss on Wednesday, May 18th, 2022 at 2 PM ET live from the infamous Pangea Restaurant.

Wendy Stuart is an author, celebrity interviewer, model, filmmaker and hosts “Pandemic Cooking With Wendy,” a popular YouTube comedic cooking show born in the era of Covid-19, and TriVersity Talk, a weekly web series with featured guests discussing their lives, activism and pressing issues in the LGBTQ Community.

Justin Fornal is an international explorer and an award-winning writer and television host. He has written and researched for National Geographic and currently hosts Unexplained and Unexplored, a program that uses ancient maps and cutting-edge technology to solve historic mysteries. Unexplained and Unexplored airs on the Science Channel and Discovery Channel in over 170 countries. Justin’s field work focuses largely on vanishing cultural traditions and the returning of stolen relics. He is the Co-Founder of HASAN (History, Arts, and Science Action Network). In 2016 he tracked down the lost skull of enslaved rebellion leader Nat Turner and repatriated it to the Turner descendants. Justin is a lover of open water swimming. On August 14th he will attempt the first ever human powered swim from Canada to Greenland across the Nares Strait. In 2021 Justin co-found Fornal Forests, a spirit company that specials in alcohol made from birch trees.

Watch Justin Fornal on “If These Walls Could Talk” with hosts Wendy Stuart and Tym Moss on YouTube here: