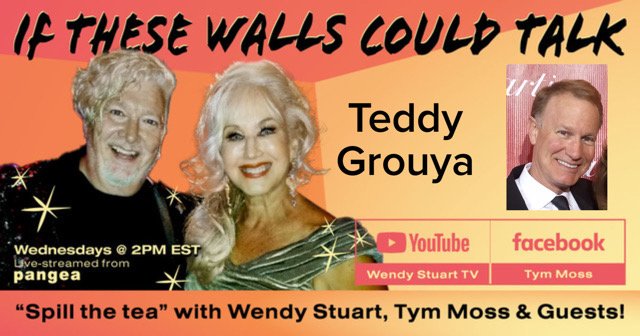 Teddy Grouya will be a featured guest on “If These Walls Could Talk” with hosts Wendy Stuart and Tym Moss on Wednesday, April 6th, 2022 at 2 PM ET live from the infamous Pangea Restaurant.

Wendy Stuart is an author, celebrity interviewer, model, filmmaker and hosts “Pandemic Cooking With Wendy,” a popular YouTube comedic cooking show born in the era of Covid-19, and TriVersity Talk, a weekly web series with featured guests discussing their lives, activism and pressing issues in the LGBTQ Community.

Before and after graduating from UCLA, Teddy worked on several Hollywood films as well as directing live television.  Later, Teddy received an M.A. from the Australian National University in International Relations and then worked in international programs for the State Department.  Today, Teddy is directing several film and television programs.  Additionally, Teddy continues to work as an editorial and production consultant on films in development as well as in the rough cut stages- recent films include The Bill Murray Experience and Planet of the Humans (executive produced by Michael Moore).

AmDocs’ year-round mission is to enhance and encourage education outreach through film as well as international conference and filmmaker exchanges.  www.amdocfilmfest.com

Watch Teddy Grouya on “If These Walls Could Talk” with hosts Wendy Stuart and Tym Moss on YouTube here: