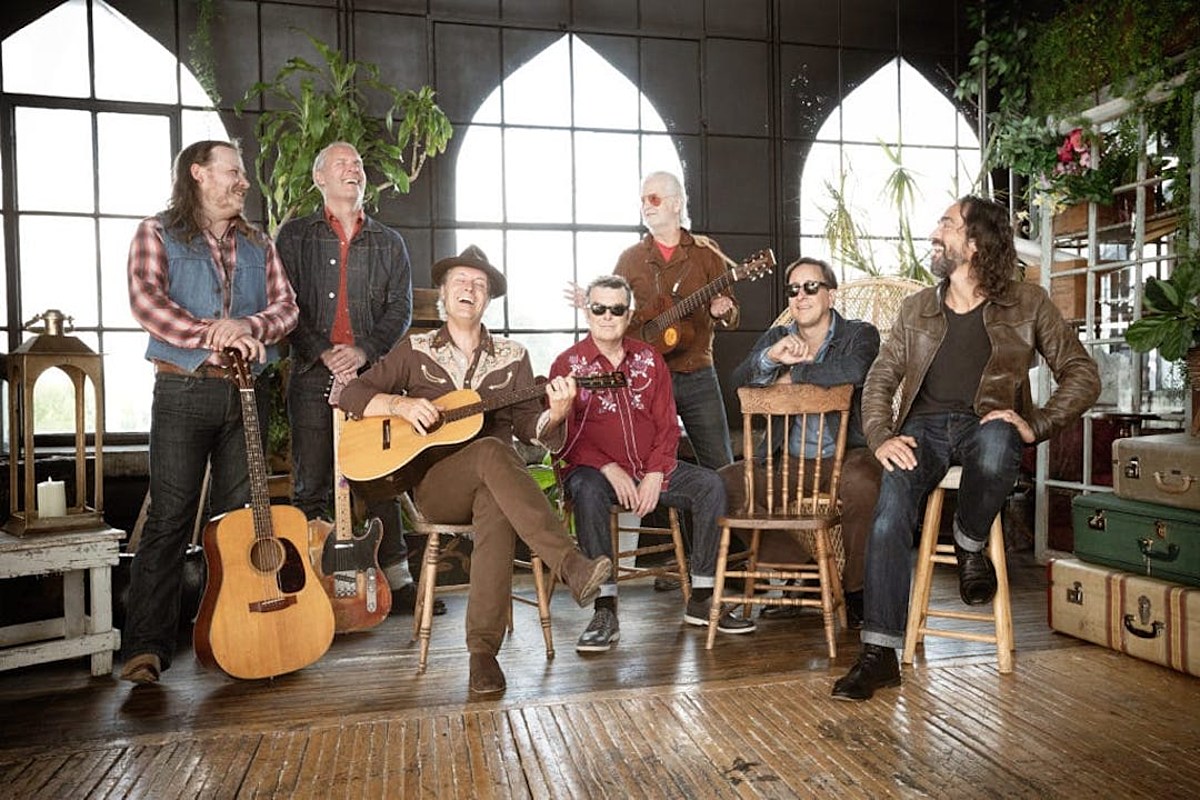 In one sense, it often seems like Blue Rodeo are a band that exists in a different time. At the very least, you can quickly surmise that the Canadian group grew up surrounded by the right records, based on the cover songs they’ve sprinkled throughout their recorded repertoire.

In their early days, “Good Year for the Roses” by George Jones was a staple, and later, guitarist-vocalist Jim Cuddy would tackle “You Were On My Mind,” written by Sylvia Tyson of Ian & Sylvia fame. More recently, Cuddy tackled another Jones track, “Almost Persuaded” and Glen Campbell’s “Rhinestone Cowboy” for his own Countrywide Soul album in 2019.

Cuddy could have easily been just another country crooner. He’s got that voice. But like so many musicians, he saw the Beatles on The Ed Sullivan Show when he was eight, which opened an important door. By the time he was in high school, Cuddy knew he wanted to pursue a career in music.

He met his future Blue Rodeo collaborator Greg Keelor at that same time, who was listening to “all kinds of music” and he provided another important gateway. “Greg was a pretty forward thinking music listener,” Cuddy tells The Boot. “He introduced me to lots of stuff very early on. That really broadened the palette too.”

The music they would record together, starting with 1987’s Outskirts, was a fascinating blend of country-tinged rock, melded with psychedelic leanings that often came from Keelor’s pen. His songwriting, which spun off occasionally into a more dark and mysterious direction, would weave compelling tales like “Floating” and “Piranha Pool,” leaving one with a lot to unpack.

It was the harmonies of the pair combined on a song like “Rose Coloured Glasses,” which helped to draw in many a listener. Keelor was the yin to Cuddy’s songwriting yang and it’s a collaboration that, in theory, shouldn’t work. But for more than 35 years, it’s been a winning combination.

“I think that Greg has always been a very original songwriter,” Cuddy offers. “He’s always followed his own muse and I think that from the beginning, we had to accept that we were very different songwriters. That we wanted different things out of songs.”

“But we pretty much always found a way to join our two different sensibilities,” he continues. “Often, just with harmonies. But sometimes with stylistic things.”

Within the track listing of Many a Mile, the band’s sixteenth studio album, their bond continues to flourish. Born of the pandemic, it also emerged at a time when they thought they were perhaps done making albums as a group. It was Keelor, walking with his longtime friend outside of a gig in Vancouver, who suggested that it was time for them to look at starting the next record.

Cuddy was floored. For many years, Keelor had struggled with tinnitus that was getting worse, to the point that he started to get debilitating migraines. Once touring wrapped for the previous album, 1000 Arms, there was a loose understanding that perhaps they would just play shows and abandon the idea of recording together.

He asked his comrade if he was sure he wanted to go down the path again, and left him some time to think things over. “We get into this little waiting period where I think I’m waiting for him to decide and he thinks he’s waiting for me,” Cuddy recalls with a chuckle. “Eventually, our manager said to me, “You know, Greg is waiting for you to say, ‘Let’s do a record.’” I’m like, “Really? I thought it was the other way around! Okay, let’s go!”

The timing proved to be interesting. With the pandemic in full swing, Cuddy was “three-quarters” into a solo album, working in a bubble with his band and producers Tim Vesely and Colin Cripps, who also plays lead guitar in Blue Rodeo. They decided to mirror that approach with Keelor setting up his own bubble, working with James McKenty and Jim Bowskill.

“We got all of the songs acoustically and Tim would take beats off of the internet and then we’d bring in one person at a time,” Cuddy recalls now. “We’d send that all out to Greg and he’d put on his stuff. Jimmy Bowskill came in and did his stuff. Then Greg’s stuff was sort of done and he would send it in. I’d sing on it, the guys would go out and replace parts [on the demos]. So there was this back and forth, but one [person] at a time.”

In an interesting way, the whole experience hearkened back in a small sense to how the band recorded Outskirts. “We worked with Terry Brown [the Canadian producer known for his work with Rush], which was a more formal way of working,” Cuddy explains. “One guy at a time, click tracks and all of that bullshit. We’re much more inclined to work in the Daniel Lanois way, in a room all trying to get a vibe together. The advantage of that is that you get this feeling of what the song is going to be like when you get it down.”

Ultimately, Cuddy found himself really satisfied with the approach they took for Many a Mile. They had the luxury of time, something which they’d never had before when it came to making an album. The benefits were many. “Glenn [Milchem] had as much time as he wanted,” he cites as one example. “That man is a brilliant drummer [and] really articulate drummer. It all made a difference.”

Happily, the album hardly sounds like it was pieced together, mailed back and forth between two worlds. Listening to the introspective album opener, “When You Were Wild,” one can picture the band all sitting in the room together, jamming and playing off of each other, even though the reality was far different. Michael Boguski’s Hammond organ swells on the track lift the musical feelings even higher.

Cuddy’s “I Owe It To Myself” acknowledges, from his perspective, the feelings that one gets as time marches on. “I thought, this is a reckoning,” he says. “You’re at an age, stop bullshitting with everybody else’s expectations and just do what you want.”

“The Opening Act” is the latest chapter in a subtle running list of great road-inspired songs from Keelor, check “Me & Baz” from 1997’s Tremolo, “Stage Door” from 2002’s Palace of Gold and “What Am I Doing Here” from 1990’s Casino for additional points of reference.

It’s an album which sounds casual in the way that 1993’s landmark Five Days in July did. Effortless, but even Cuddy himself knows it was deceptively easy. “I know that whatever happens, if it’s easy for this band. It will never happen again,” he laughs. “So I wonder what’s going to happen next. But this one was just a very joyful experience to work on.”

The band will hit the road in support of Many a Mile starting in January with an extensive Canadian tour. U.S. touring in recent years has been largely limited to border cities and traditional strongholds like Chicago and New York. “Those would be very possible,” Cuddy says. “But right now, it’s still visa-wise, border-wise, it’s onerous.”

“I would say the earliest we’d be looking at U.S. dates, it’s possible that it would happen in the early summer,” he concludes. “But it will probably be the fall.”

These Artists Prove Traditional Country Is Alive and Well