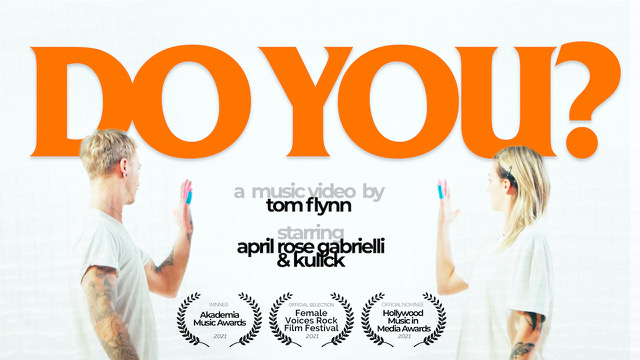 April Rose Gabrielli’s new single “Do You?” which is currently #24 on the Billboard AC Charts, and also hit #1 on the Mediabase Adult Contemporary Independent Artists ranking and is in the Top 25 on the Mediabase Adult Contemporary Charts,  is racking up prestigious nominations and awards all over the United States.  “Do You?” is released on SohoJohnny’s Soho Records and Sony AWAL.

“Do You?” was chosen as an official selection of the “Female Voices Rock” Film Festival taking place December 1-5, 2021 (an in person and virtual event). “Female Voices Rock” is dedicated to supporting diverse female storytellers in the entertainment industry. Their mission is to incite and inspire change that builds a foundation of equality and diversity, ensuring that every voice is heard and championed.

“Do You?” by April Rose Gabrielli is also an official nominee for an HMMA award. Hollywood Music In Media Awards is the first award organization to honor original music (Song and Score) in all visual media from around the globe including film, TV, video games, trailers, commercial advertisements, documentaries and special programs. The HMMA nominations have historically been representative of the nominees of key awards shows that are announced months later. The HMMA main event features live music performances, celebrity presenters, tributes to music industry icons, awards for composers, songwriters and artists. The HMMA also celebrates emerging, independent artists and music influencers from around the globe for creative and innovative contributions.

“Do You?” is the debut single from alternative-rock singer, songwriter, pianist, producer and poet: April Rose Gabrielli. “Do You?” is the perfect musical introduction to April as it represents the way she often weaves poetic lyrics, powerhouse vocals and stacked harmonies into a rock track centered around catchy pop melodies. Thematically, using the words “Do You?” in a few different contexts, the lyrics touch upon the ways in which she has mastered the art of emotional deflection and indecision to “keep the peace” with those around her. The track was written and produced by April Rose Gabrielli, with production, songwriting and engineering help from Kulick (Enci Records) & lifelong friend, Kevin Eiserman.

April Rose Gabrielli’s new music video “Do You?” has just been add to MTV U, and MTV Spankin’ New, where up-and-coming artists often have their first big debut before becoming household names.

Watch the “Do You?” music video that is on MTV Spankin’ New and MTV U by April Rose Gabrielli here: