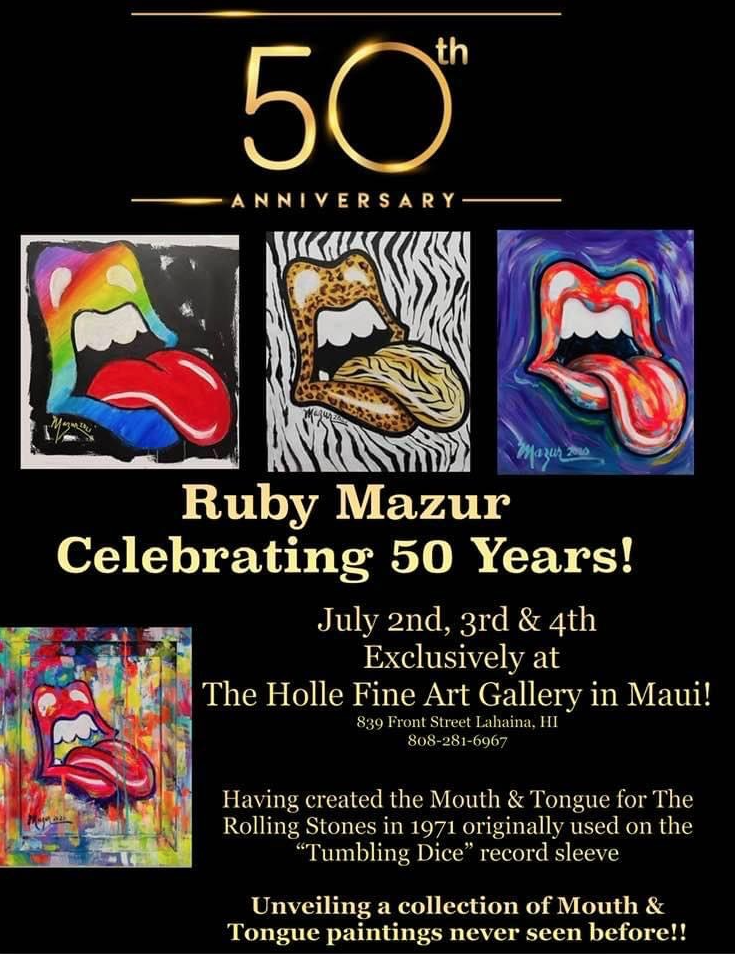 The presence seems most perfect when its seeds lie in the past. On July 2, 3, & 4, artist and creator Ruby Mazur will be celebrating the 50th anniversary of one of the most recognizable images in rock n’ roll history. His “Mouth and Tongue” originally used by the Rolling Stones for their “Tumbling Dice” Record Sleeve. Set to take place at the Holle Fine Art Gallery on Maui, this historic extravaganza will feature a collection of derivative paintings influenced by the “Mouth and Tongue.” The revolutionary exhibit put on by Cosmic Wire will display both digital NFTs created in collaboration with artist Jim Evans and Digger Mesch and the original Ruby Mazur physical canvas of each work. Scott Page, the illustrious saxophone player from Pink Floyd, Supertramp, and Toto will also musically appear, performing with Falling Doves. Chris Dotson of EonDigital out of Knoxville Tennessee created the custom digital frames to display the NFT originals in this revolutionary exhibit.

Representing the soul of the past, this legendary image began its voyage in 1971 on the “Tumbling Dice” record sleeve for The Rolling Stones.

As part of the 50th Anniversary of Ruby Mazur’s “Mouth and Tongue” Cosmic Wire in partnership will be presenting the first every NFT/Canvas Hybrid Auctions in Hawaii. There will be a special once in a lifetime pre-buy opportunity one hour before the auction. Starting at 3 pm Hawaii-Aleutian Standard Time, 6 pm PT and 9 pm ET, each piece will be priced at $1.1m, which will include BOTH the original Canvas and the Original NFT. Following the pre-buy, the auction will start at 4 pm Hawaii-Aleutian Standard Time and will continue for one week via Cosmic Wire’s proprietary branded NFT stores. 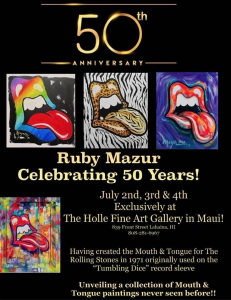 As an artist Mazur has created the covers for soundtrack albums including Malcom X, the original 1971’s Willy Wonka and the Chocolate Factory, Love Story, Lenny Bruce, and Elton John’s first American Soundtrack album “Friends.” He has designed over 3000 album covers for not only the Rolling Stones “Tumbling Dice” record sleeve, but for BB King, Billy Joel, Dusty Springfield, Elton John, Ray Charles, Steely Dan, Jimmy Buffett, and limitless others.

Join Ruby, Scott Page, The Falling Doves, Jeff and Tani Holle, and Cosmic Wire led by Artist/Producer BLAZAR on site for this once in a lifetime artistic display and auction at the Holle Fine Art Gallery located at 839 Front Street, Lahaina, Maui. They will be there to meet and greet their fans and followers as this display continues to embody the very spirit of Rock N’ Roll…..