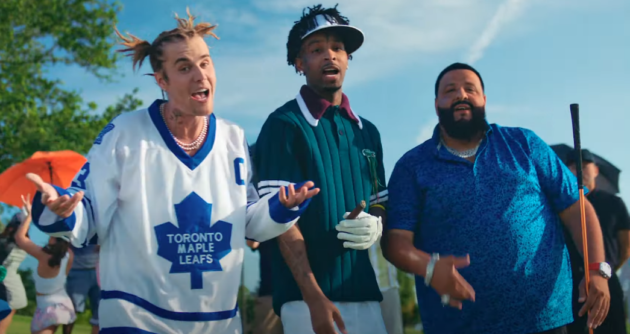 Hot off his No. 1 debut, DJ Khaled’s calling the shots in his Khaled Khaled album’s new video featuring Justin Bieber and 21 Savage.

At the We The Best club resort, the Colin Tilley-directed clip inspired by Adam Sandler’s Happy Gilmore, centers Khaled hosting a friendly golf tournament with his club members. After learning his caddy Justin Bieber’s golf skills, he puts him against 21 Savage for a game. Khaled cruises the course in Lamborghini carts and even wrestles an alligator.

“Let It Go” continues Khaled’s series of videos off the project including “We Going Crazy” with H.E.R. and Migos, Lil Baby and Lil Durk’s “Every Chance I Get“, “Thankful” by Lil Wayne and Jeremih, as well as “Where You From” featuring Buju Banton, Capleton, Bounty Killer, Barrington Levy, and the epic “Sorry Not Sorry” starring JAY-Z, Nas, James Fauntleroy and Harmonies By The Hive.