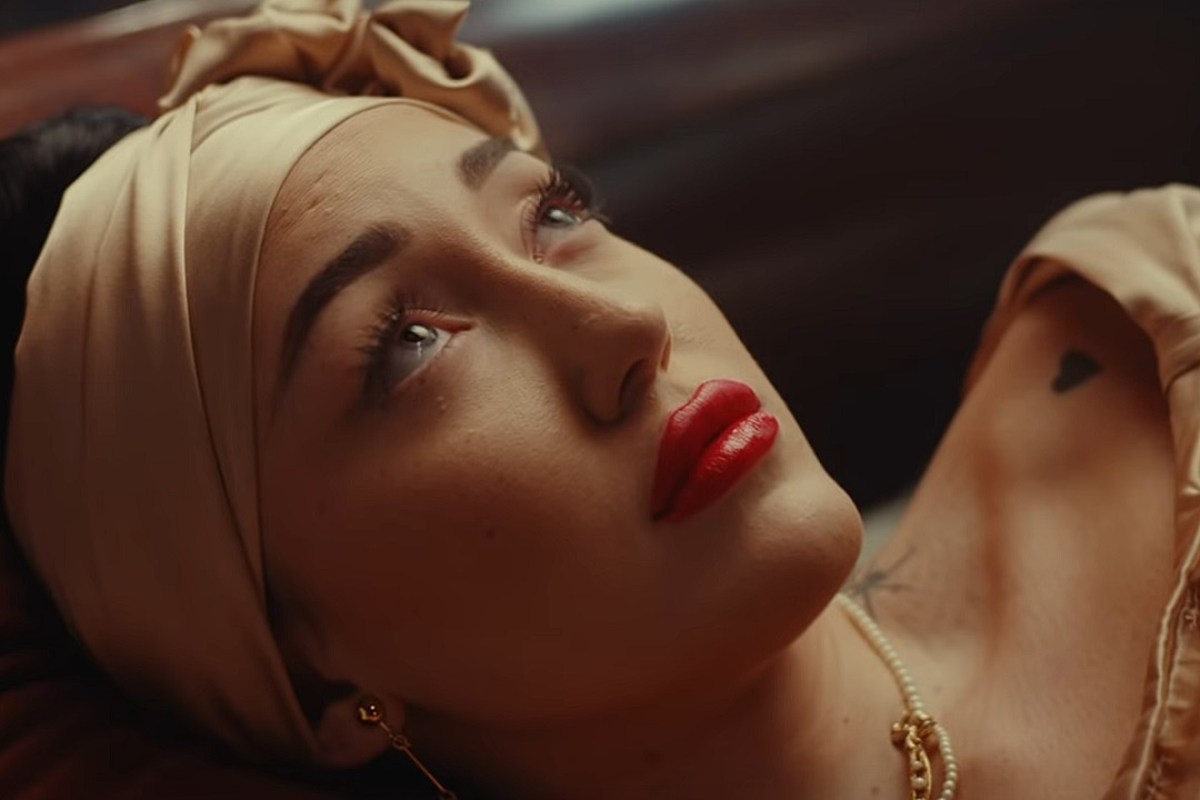 Noah Cyrus knew that she wanted to work with PJ Harding the moment she met him during a 2018 summer songwriting camp in Bali. “Honestly, when I met him that was like the first question. I was like, can we be in a band?” she tells PopCrush.

The pair eventually worked together for her 2020 EP, The End of Everything, but it wasn’t until quarantine hit the same year that they officially formed a duo. Inspired by their shared love of folk music, Cyrus and Harding teamed up to create a stunning folk EP that proves just how deep Cyrus’ genre-defying influences and love of the genre go.

“I think this is just closest to home for me, and it’s what came naturally in the room with PJ and myself,” Cyrus shares of People Don’t Change, calling the EP a “bedroom folk” project. “Everybody’s a little limited from being unable to even work in [the same] room together. With PJ and myself, because he’s all the way in Australia … every single song was made in my home or his home.”

Cyrus and Harding completed the majority of the project over Zoom, and they were surprised to find how quickly they could finish music virtually compared to working in-person. Together, the pair even worked on the EP cover artwork together, contributing to the original mock-ups. The drawing is of Thompson’s Station, Tennessee, where Cyrus is from.

“Basically, the day and tonight is a representation of this trip that I had taken to Nashville. I was really inspired by it,” she explains. The trip took place around the same time as the CMT Awards in October 2020, where Cyrus performed her country collaboration, “This Is Us,” with Jimmie Allen. But Cyrus was going through a lot at the time.

“When I came home I was writing a ton about my experience. While I was [out] there I was also going through a breakup at the time, and a lot of this EP is inspired by that.”

The cover for People Don’t Change includes some other personal meanings. In the center, you can spot Harding holding a guitar, as the entire project “started with PJ and a guitar.” And if you look even closer you can find hidden stories embedded in the artwork that correlate to their music.

“You have this like, living breathing daytime and this night time with a factory polluting the air [with] smoke, and the tree is dying,” Cyrus shares. “It’s kind of this world that we’re living in right now … When I go home [to Nashville] it’s this breath of fresh air, and I whenever I come back to L.A., it’s very different.” For Cyrus, the artwork represents how drastic an otherwise simple change can be, and how it can feel “as big as life and death.”

Cyrus and Harding’s lyrical storytelling is just as powerful as their visuals. For instance, Cyrus believes that their lead single, “Dear August,” is their “letter of hope for the future.” When they wrote the song, Harding was in the process of moving back to his home country of Australia and neither knew what was going to happen considering the current state of the world.

“It was just a weird time. I think this year has been a huge year for my own self-growth. In the past like six months, I’ve really had a breakthrough a lot with my mental health and just figuring out how to navigate myself to be okay when I’m not feeling okay. That’s definitely been a difficult journey. It took a minute just for me to feel a little bit of peace right now.”

Cyrus credits the EP for keeping her focused, as it gave her something she could keep looking forward to: “I feel like music has been the one thing that’s brought everyone together this past year. It really helped everyone get out of their funks and their heads a little bit.”

Another standout song on the record that holds personal meaning for Cyrus is “The Worst of You,” which paints “a pretty perfect picture of the relationship that I was in at the time of writing this.”

“I wrote that in a pretty hurt place,” Cyrus reveals. “I think this whole EP captures an entire moment in time for me, which is beautiful because I feel like I’ll always be taken back to this time. And that’s okay, because even though it was a really hard time for me and I learned a lot, it’s like I get to watch this movie in my head when I listen to these songs.”

The singer-songwriter is still learning to trust her own instinct when it comes to knowing when a song is fully completed instead of relying on the advice of others. Production-wise, Cyrus worked closely with Harding to fully realize what they wanted each of the finished mixes to sound like.

“I love opinions but I think the one good thing about the people around me is that they try to get me to really trust in what I think is right for my records,” she says. “That’s kind of a new exercise that I’m working on—trusting myself when I think a record is done.”

Aside from the EP, she recently collaborated with Demi Lovato on “Easy,” a song off the pop star’s new album, Dancing With The Devil… The Art of Starting Over. The duet came about after Lovato texted Cyrus to ask what she thought of the at-the-time unreleased record. A collaboration between the two Disney alums just “made sense.”

“I just adore her so I immediately wanted to do something. I felt a ballad would definitely be fire between the two of us, just because I think Demi has such a powerhouse vocal,” Cyrus gushes. “She reads so clear on ‘Easy’ that I hadn’t heard her sing like that in so long. I was blown away by her performance. It was very cool to be a part of that.”

As for Cyrus’ next project? After years of single releases, collaborations and EPs, the artist is hard at work on her debut full-length studio album. But even so, she’s taking her time to perfect her vision.

“I’m getting there. I’m just kind of still wrapping my head around it. The thought process of a first album? That’s a pretty big deal.”